Are you a Coot? 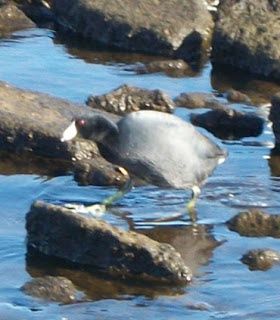 Have you seen the above bird before? What is he? He is mistakenly referred to as a 'weird' duck on occasion. Nevertheless, this is not a 'weird' duck but an American Coot. The coot has the ability to live with ducks. While we lived in NC, it was a pleasure of mine to be able to take photos like the one above at Union Point Park. Our park had 4-5 coots that lived part of the year with the ducks. 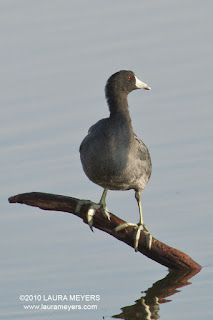 The coot is a waterfowl bird yet, not a duck. He has a triangular beak and non-webbed feet (chicken-like features). Yet, to watch him at the park, it becomes evident he thinks he belongs with the ducks. Is it because everyone likes the ducks and feeds them and he will be able to have a meal? Most people at the park treat him no different than the ducks. However, he and his siblings were the ones that I was attracted to the most.
God has been ruminating this simple devotional with the coot for multiple months. The ironic thing is as mentioned before "Simple does not equate to easy" (A line from the family movie, What If). The ability the coot has to be mistaken for a duck and blend in with them has several spiritual applications.
1. Where am I being mistaken for something that I am not?
2. How often can I blend in & look no different than my surroundings?
Take time this week to ponder those questions.

***Only the first picture was taken by me. The other picture belongs to Laura Meyers***
Posted by Being a Child of God..... at 6:00 PM