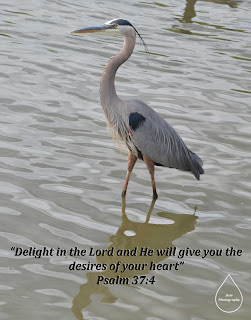 Wow! I can't believe what just happened. My blog post totally disappeared. I started by hitting the back button and it wasn't there. I had saved it while working and wasn't concerned. Nonetheless, it is GONE!!!

Therefore, I am starting from scratch. One good thing out of all this:
I will have definitely meet my writing goal for today.

My whole other post was how I wanted to declare that I am a writer. It is part of a lesson in a  book called, "15 Habits of Great Writers" by Jeff Goins. There was stuff in there about Jesus being my passion and how I am going to write everything for Him. Yet, it is all GONE, GONE, GONE.
Did I mention it is gone?

So, instead of the other post which apparently wasn't meant to be....I am going to tell you the story of the blue heron in the picture above. It reinforced the lesson for me that things happen in God's timing, not ours.

A while back, I took some graduation pictures for my friend's daughter. We met at the duck pond in our Central Park (no, not the one in New York). Upon my arrival, I saw this blue heron fly across the pond. I didn't get a shot of him. Ever since that day, whenever I would go to this particular spot to take pictures my eyes were searching for the blue heron. This all happened before my surgery on May 2nd.

In the meantime, during my recovery my Aunt got some awesome shots of blue herons in the area where she lives. This fueled my desire to find the blue heron here. Plus, my Dad told me there were more herons in another part of our town. Alas, I was still recovering and had to wait before I could go out and take pictures.

Then on Tuesday morning, my nephew sent me a picture text of a blue heron. I asked him where he saw it and he told me at the Central Park Pond.

"When did you get the picture", I inquired.
"Yesterday around 1:30pm", he text back.

I was excited Mr. Heron was still around. As part of my continuing recovery, I am allowed to go up and down our three flights of steps from our apartment building twice per day. Well, I asked my daughter if she would like to go run an errand, which just happened to be in Central Park. Of course, I took my camera and we went to the pond. We were walking down the pier when my daughter said, "Mom, look there he is."  Mr. Heron was standing in the middle of a boatload of Canadian Geese and Ducks that were being fed by an older gentleman. It was so amazing. I kept snapping the camera. We were trying to figure out why he was standing in the middle of the other birds. It became clear when he walked a few feet forward and then snatched up one of the catfish in the pond.

God provided not only for me to see and photo the blue heron. He let me see him have his lunch/dinner and to photograph part of it. God's timing is not ours, but His timing is perfect.
Therefore, I realize when it is God's timing last night's disappearing post will be recreated.

The following are the pictures I took of Mr. Heron yesterday (including the one at the top): 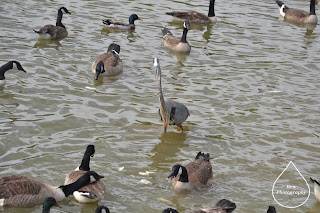 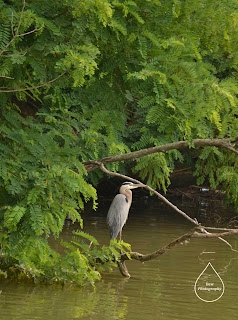 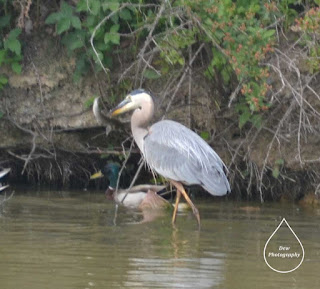 What are you waiting on God's timing for?